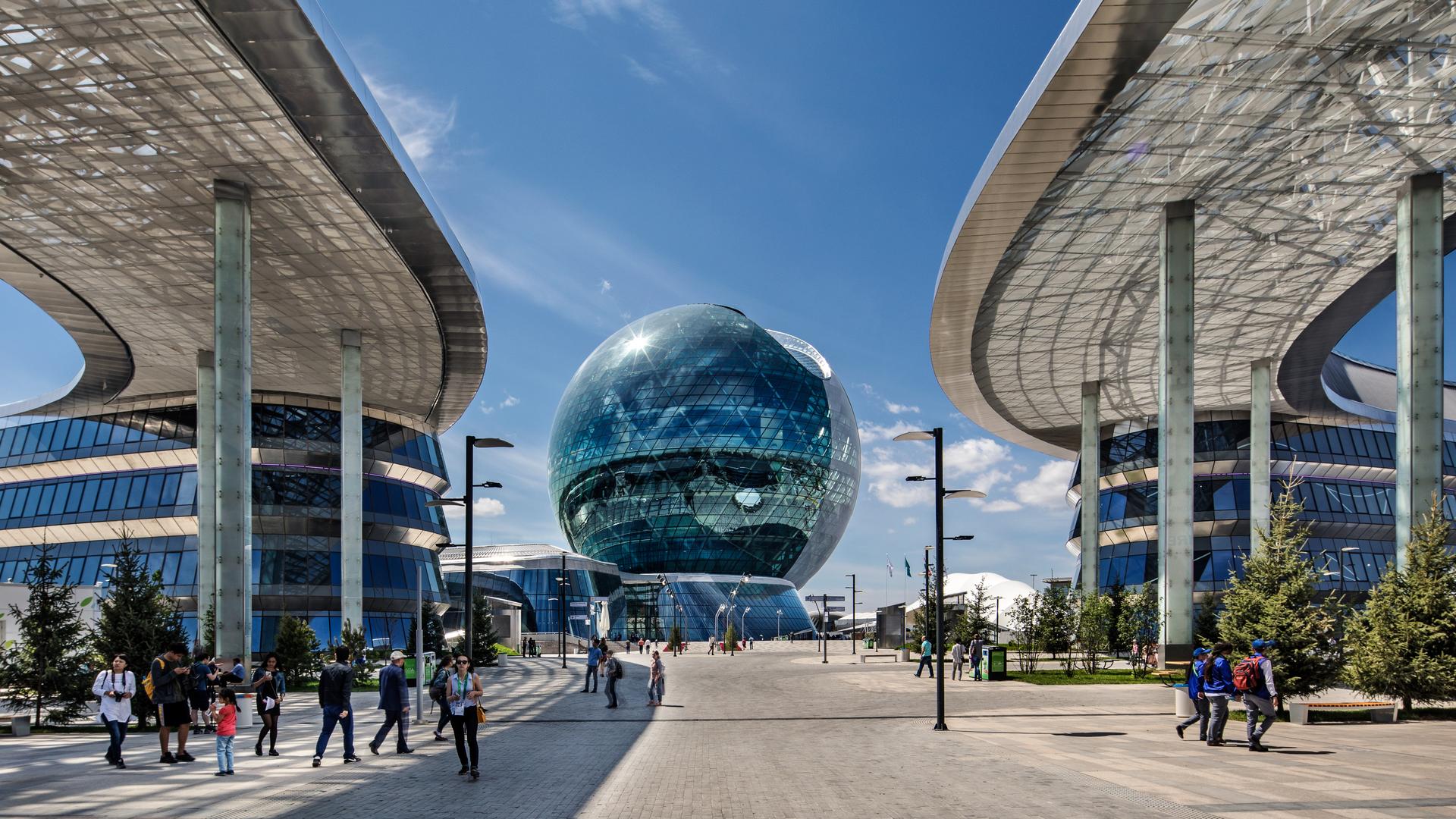 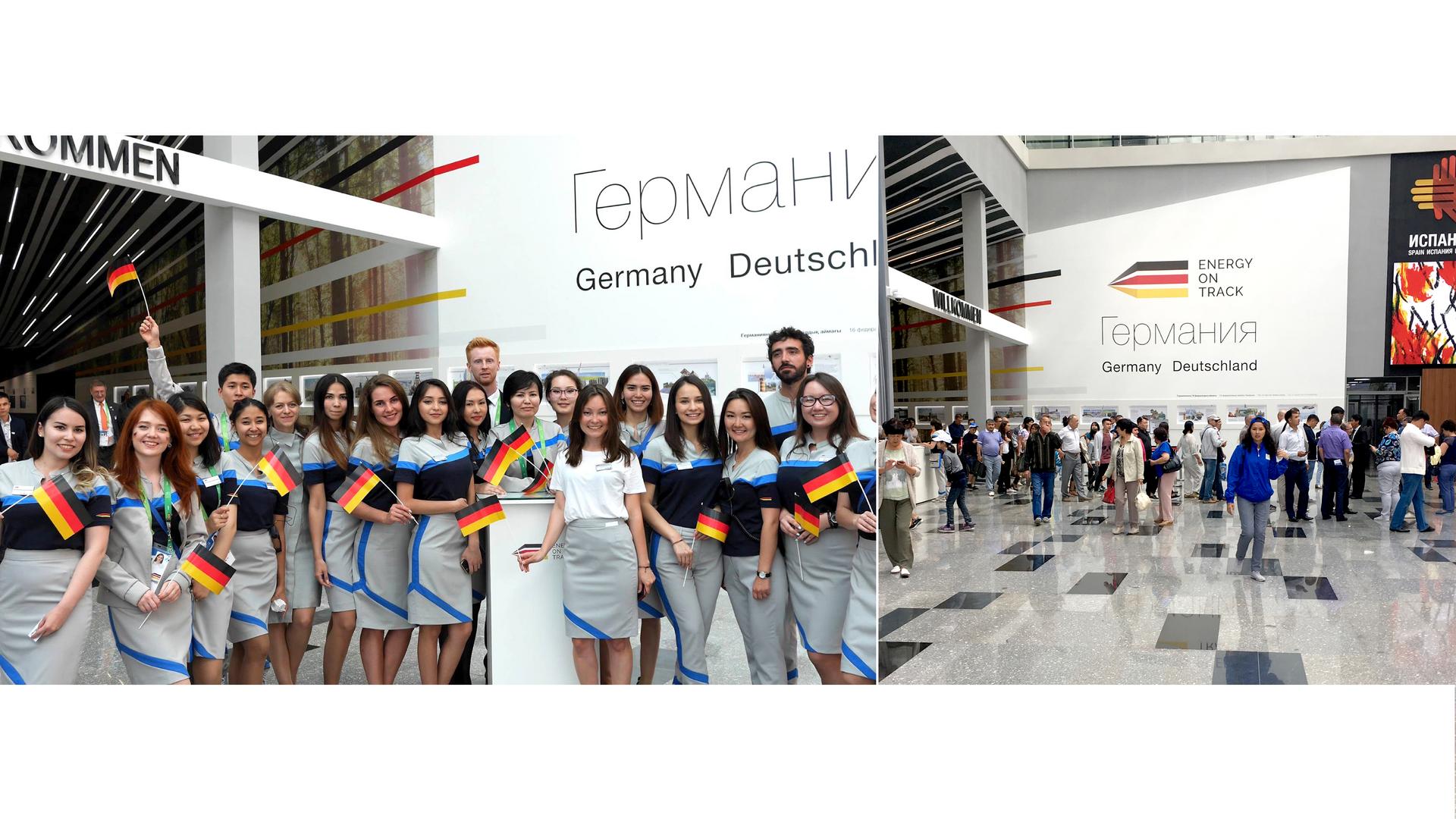 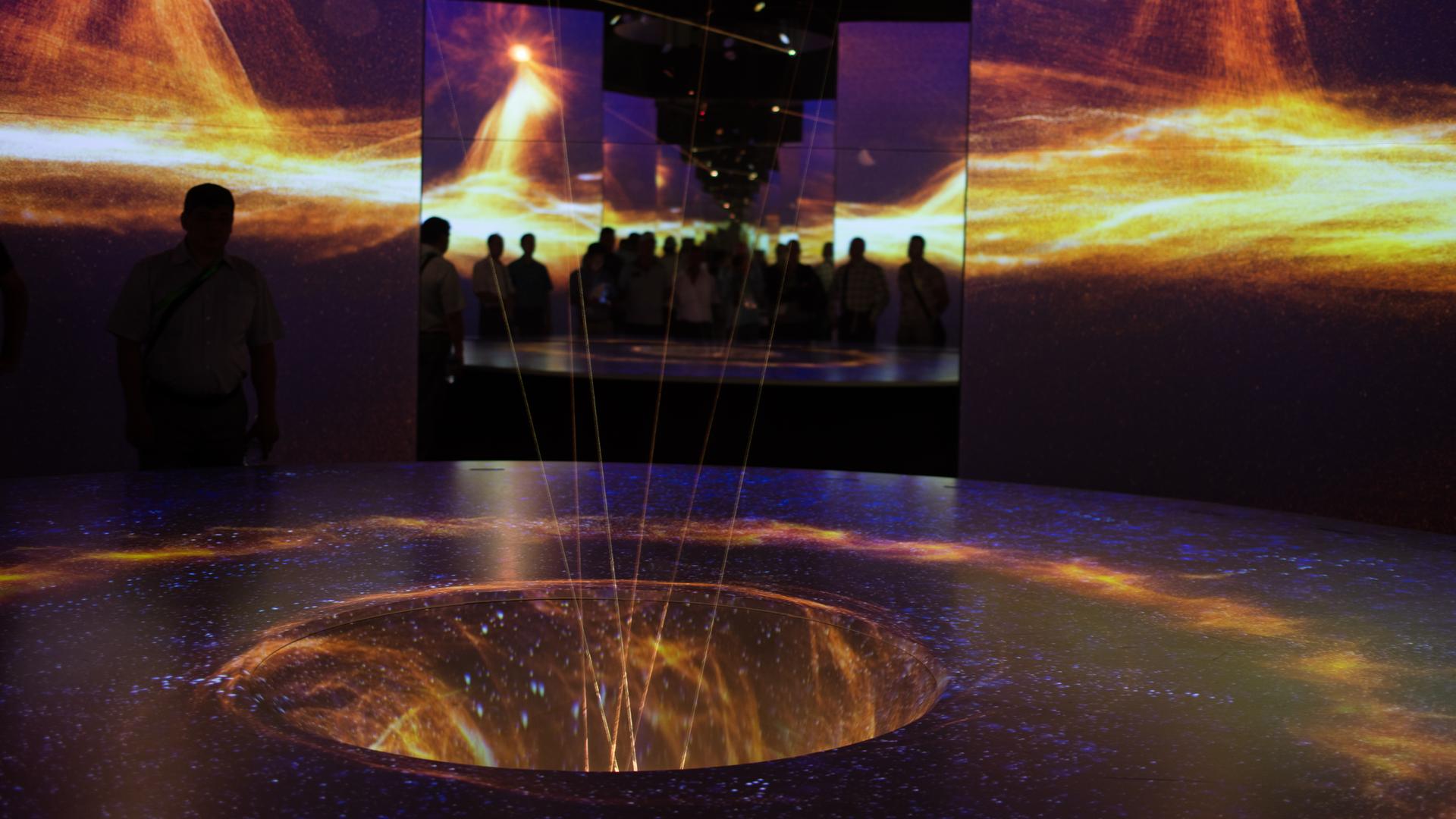 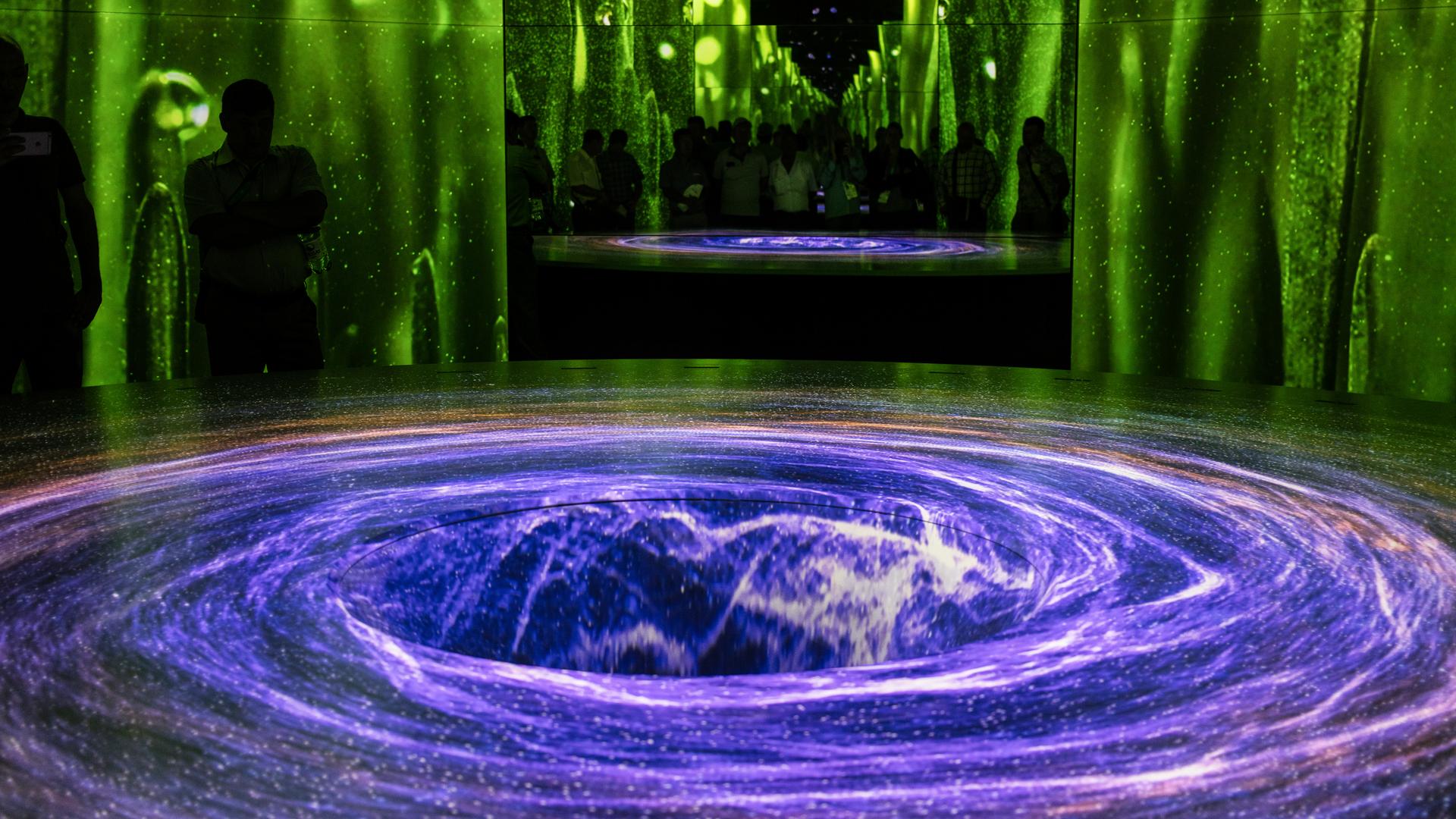 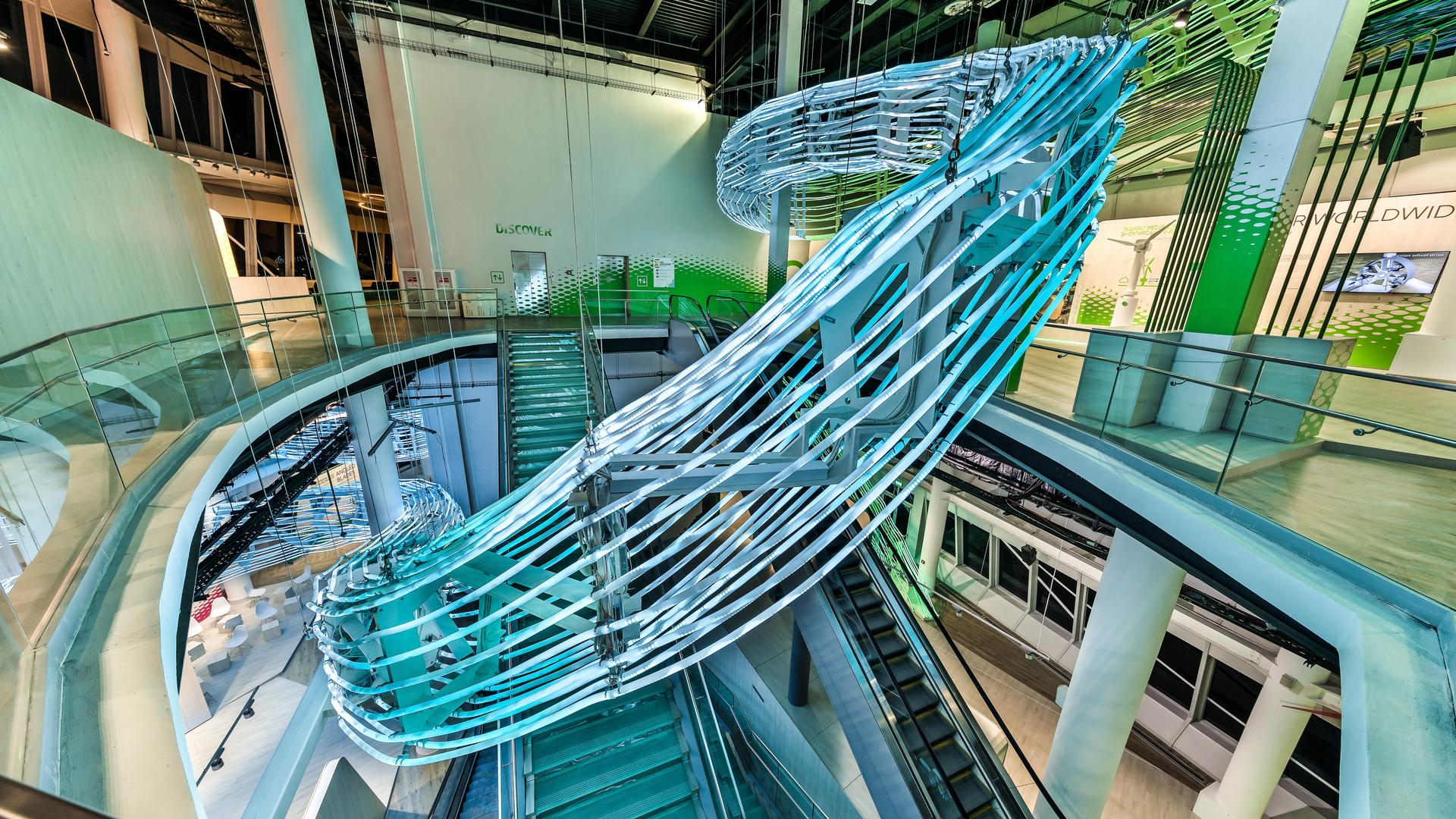 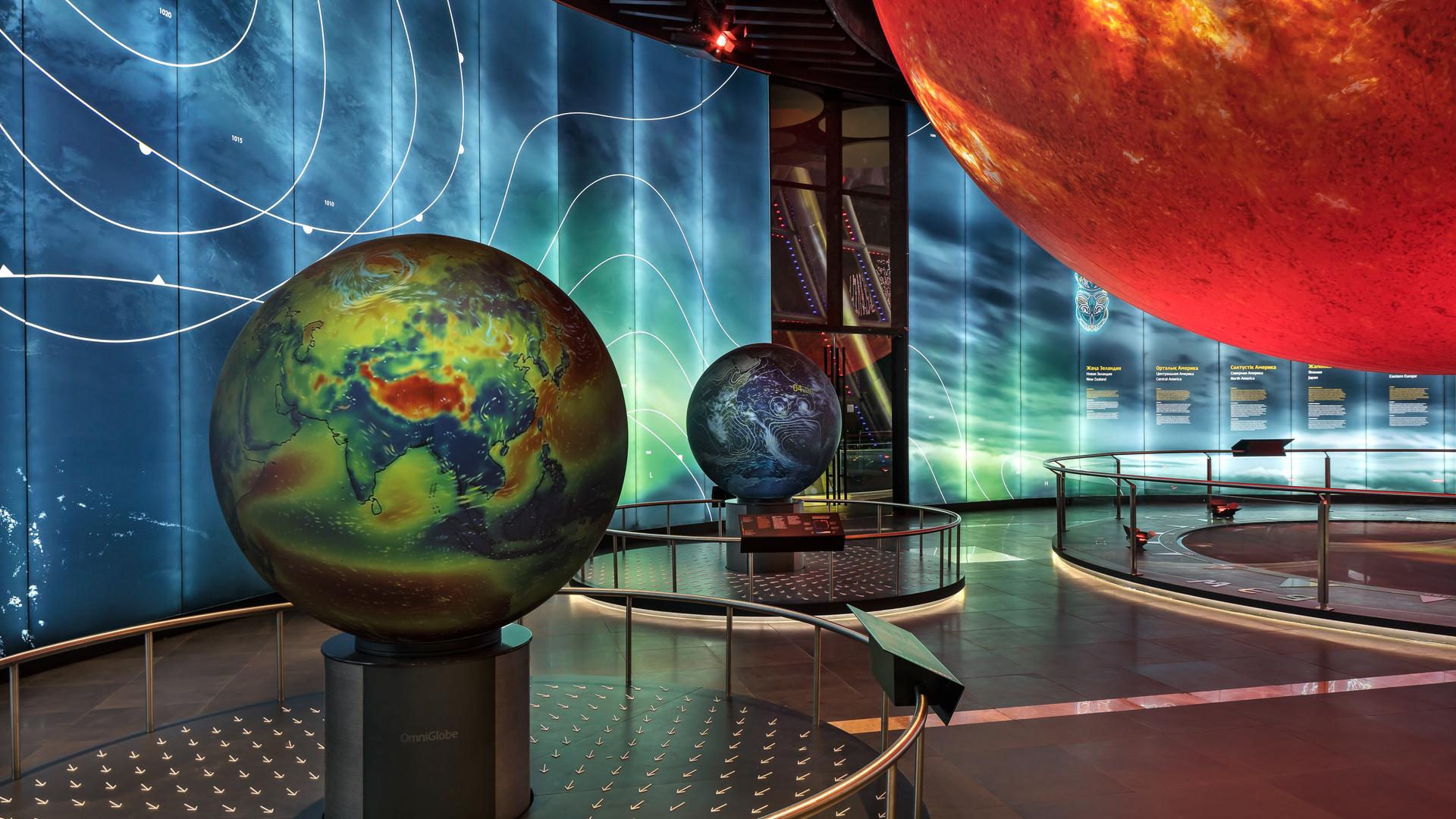 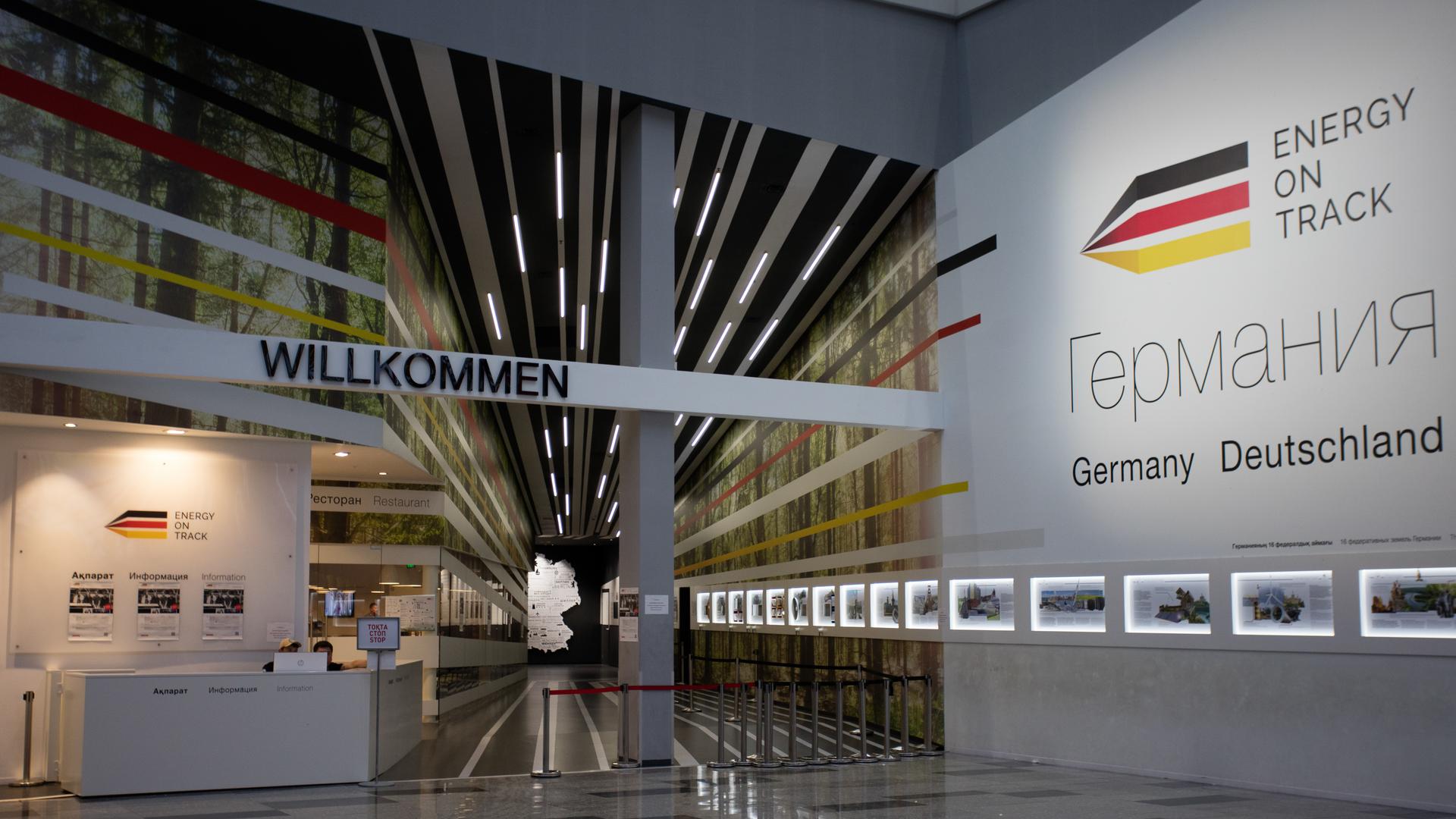 N&M was commissioned with the technical implementation of the "Astana Sphere", the German and Austrian pavilions as well as those for "Energy Best Practice" and Shell. An international team made sure that the best possible result was achieved despite some difficult circumstances on site.

Expo 2017 took place in Astana/Kazakhstan from 10th June to 10th September. The slogan of the world's fair was "Future Energy: Action for Global Sustainability". The focus was on a sufficient and reliable supply of energy in developing countries as well as on the transition from fossil fuels to renewable forms of energy. In an exhibition area covering 25 hectares, over 100 countries focused on the reduction of CO2 emissions, energy efficiency and "energy for all." Neumann&Müller Veranstaltungstechnik was commissioned to realise a grand total of five Expo projects. N&M's team, consisting of employees with international experience as well as local knowledge and supported by numerous N&M branch offices, realised the technical aspects of the presentations for exhibition venues including the national pavilions of Germany and Austria. Furthermore, N&M was also responsible for a major part of the "Astana Sphere". Officially named "Nur Alem", the world's largest self-supporting glass sphere was the host country's pavilion. Working in cooperative partnership with Adunic, the exhibition construction company, and Kunzberg, the exhibit designers, N&M was commissioned by Sembol, the general contractor, to provide the technical infrastructure and install the audio, video and lighting equipment on four levels of the sphere.

The eight floors of the glass construction were each dedicated to different forms of renewable energy. The "Wall of Future" served as an architectural connecting element while also separating the exhibition area from the light-flooded inner courtyards. Over 800 seamless displays (55 inches each) provided information on the individual thematic areas. Visitors could walk through the interior of a solar sphere measuring 13 metres in diameter and produced by a 360-degree projection realised by ten 30K and four 13K laser projectors. This impressive world of images explained how the Sun influences life on Earth. LED floodlights, projections and printed elements were used to simulate activities on the surface of the Sun. Performers manipulated the "Wheel of Life" during the "Kinetic Energy Show" on Level 3. This effect was realised by 38 moving lights that had been programmed in a time-code-controlled show sequence.

Installation of the equipment began in the middle of January in an outside temperature of minus 30 degrees Celsius - in a shell construction whose façade was not yet complete and that did not have any heating at this point. The resulting minus 18 degrees was not only very problematic for the equipment but for the personnel too. Hourly breaks were necessary to warm up, and keeping to the tight construction schedule proved something of a challenge. Due to the lack of storage space on the various levels of the sphere, equipment always had to be brought just in time from the interim storage facility to where it was needed on site. But the sphere only had one goods lift, making it a bottleneck for all of the teams working on site. Long waiting times in snowstorms became a normal occurrence for N&M's 80 strong crew, which consisted of Portuguese, Spanish, British, Russian, Ukrainian and Kazakh colleagues besides the German team members. Evgeniy Davydov - responsible for N&M's Eastern European business - acted as the "Local Coordinator" in charge of organising and supervising the local network of suppliers, technicians and subcontractors. Jens Gießler and Felix Erdmann were the project managers in charge of planning the media technology and realising construction on site.

The "Energy Best Practice" pavilion was the symbolic central point of this Expo and presented pioneering technologies as well as a wide range of different forms of sustainable energy. Divided into six thematic areas on two floors, the "Energy Stream" light sculpture was the connecting element in this pavilion. It was formed by 30 parallel splines made of a total of 9,000 metres of RGB-LED FlexStrips. Each pixel could be controlled individually, and animated content was displayed with the aid of pixel-mapping software. Robin Agarwal (N&M Düsseldorf) developed and planned the entire control system in-house specifically for this project, whereby some of the components were bespoke products manufactured to N&M's specifications. A glass fibre network with a redundant design formed the backbone of the control system.

N&M installed 30 high-performance access points for a stable WiFi for the visitor app developed by the Avantgarde agency. Visitors could use the app to interact with the exhibits and access information. In addition, the technicians were responsible for the video, audio and lighting equipment in the pavilion and also to set up the necessary infrastructure. As the client in this project was a public body, N&M had to explicitly comply with local standards and document their work thoroughly. When the project was handed over, the documentation had to be 100% compliant with Kazakh standards and regulations so that the work could be approved by the country's inspection authorities. This too was accomplished to the client's satisfaction as the team could draw on experience gathered in other Expo projects.

These included both the Shell (commissioned by Winkler Livecom) and the Austrian pavilion, which presented itself to the public in a very minimalistic design and focused on visitor interaction with the exhibits. The N&M team was engaged to realise the greatly reduced lighting design as well as the infrastructure and event IT. White power rails and appropriate lights discreetly accentuated the action areas.

First-class Equipment and a Trained Eye for Detail

A consortium headed by insglück as the lead agency placed great importance on high-quality implementation and extensive support services during the exhibition. They commissioned N&M to realise the media technology for the German pavilion. A total of five trailers of equipment had been brought from Germany to Astana prior to the commencement of construction to equip the presentation of the country with modern 4K laser projectors and other AV equipment in line with German quality standards. In order to create a first-class visual impression, special installation lights were procured and other bespoke parts manufactured, which the team then installed with a keen eye for detail. The entire equipment had taken nearly two weeks to cover the 4,700 kilometres through five countries from the N&M storage facility in Leipzig all the way to Astana. Having arrived undamaged, the last few metres turned out to be a real challenge for the logistics crew as the organisers were very restrictive in their handling of deliveries to the national pavilions: only one single logistics service provider had been approved to work on site.

The entire equipment, therefore, had to be loaded onto pallets back in Germany. Due to the heavy workload this company only delivered the desired load to its final destination after a wait of several days in some cases. This meant that fast and close collaboration was required between all the disciplines involved to make up for lost time and meet the deadline for completion.

Multimedia Experience in the German Pavilion

With its theme of "Energy on Track", the German pavilion has subsequently picked up a number of awards. The consortium responsible for the concept and design realised the project together with a team of design and media specialists and technical planners. After exploring the exhibition areas "Map of the Future" and "City of the Future", there was an interactive highlight in store for visitors to the pavilion: a multimedia experience developed from "energy points" previously collected by means of RFID smart sticks. A round table, six meters in diameter, stood in the centre of the twelve-sided room and acted as a projection surface for a twofold 4K soft edge projection. From a recess in the middle of the table, laser beams were directed onto six further projection surfaces on the outer walls of the rooms by means of a mirror sculpture installed above to enable an interactive experience. The result was an impressive 360-degree presentation, further augmented by a three-dimensional audio installation.