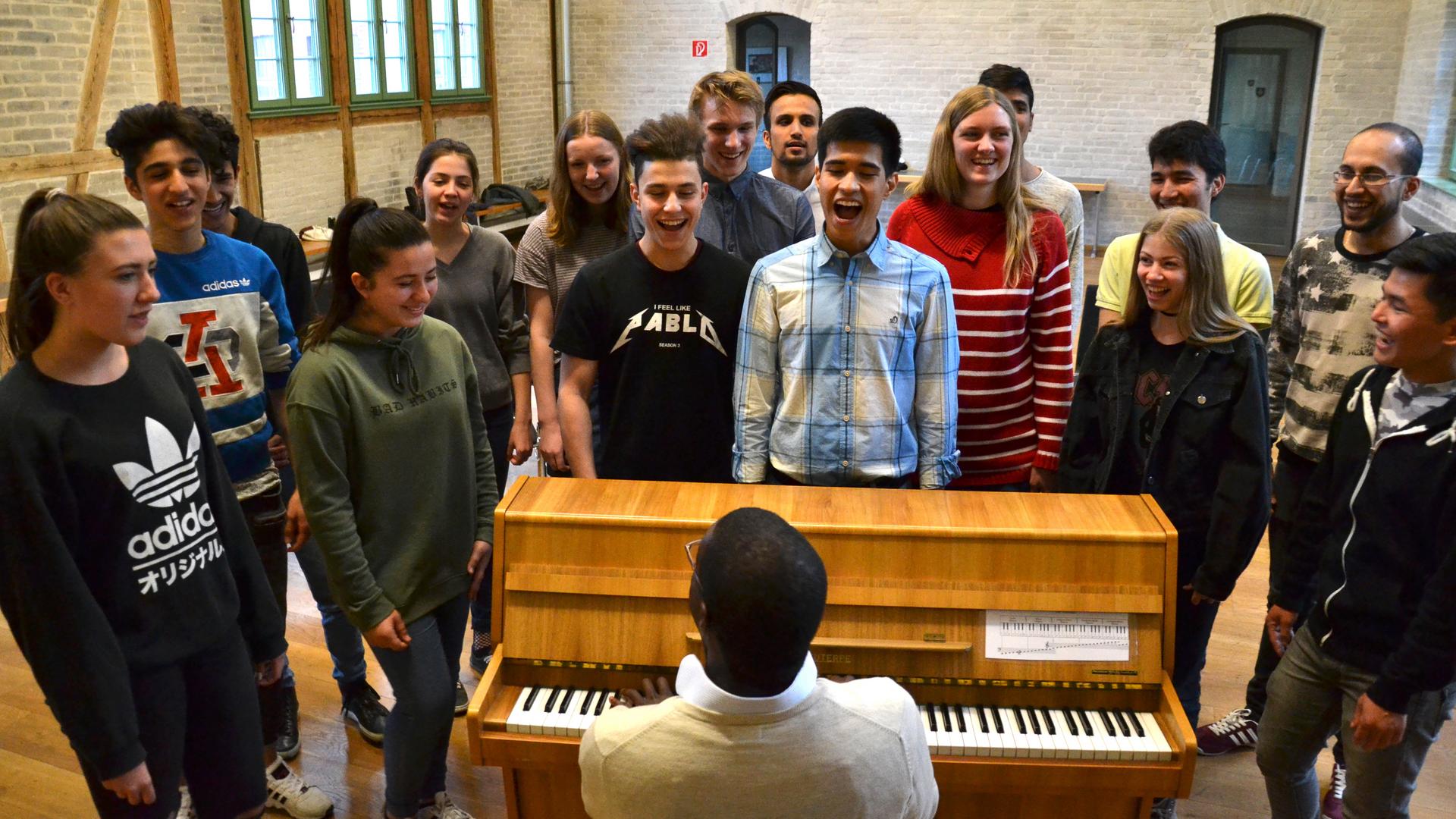 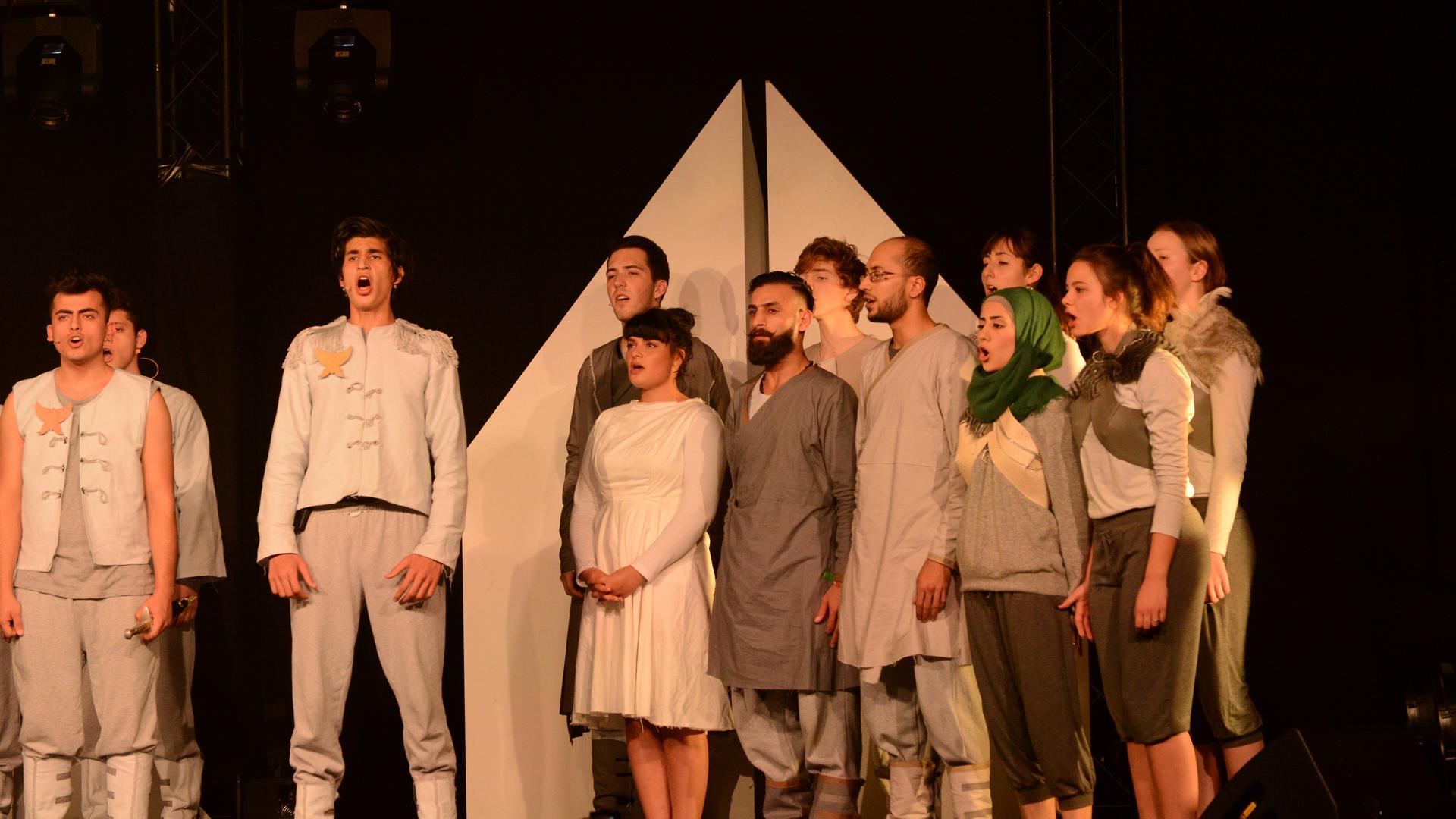 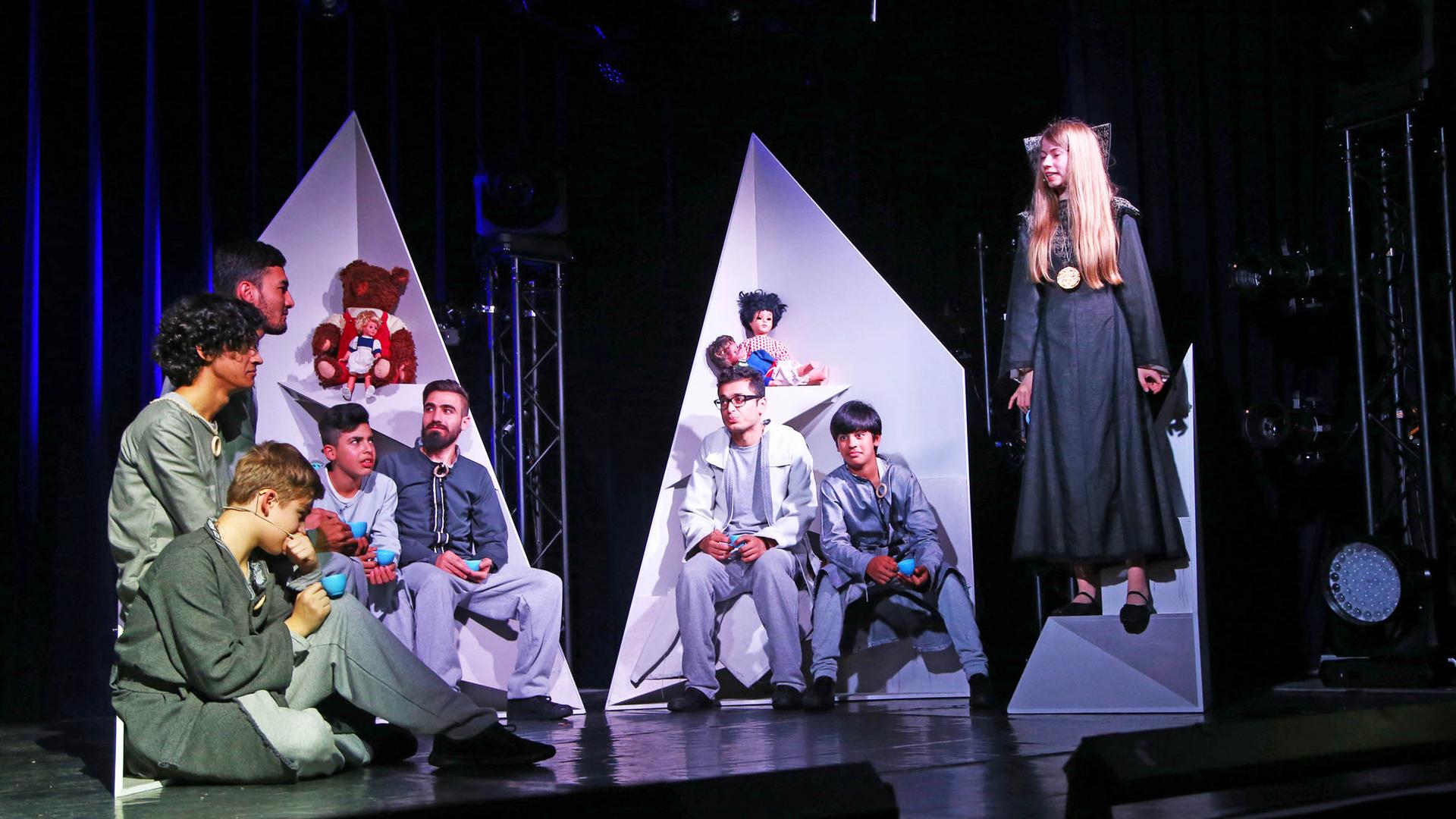 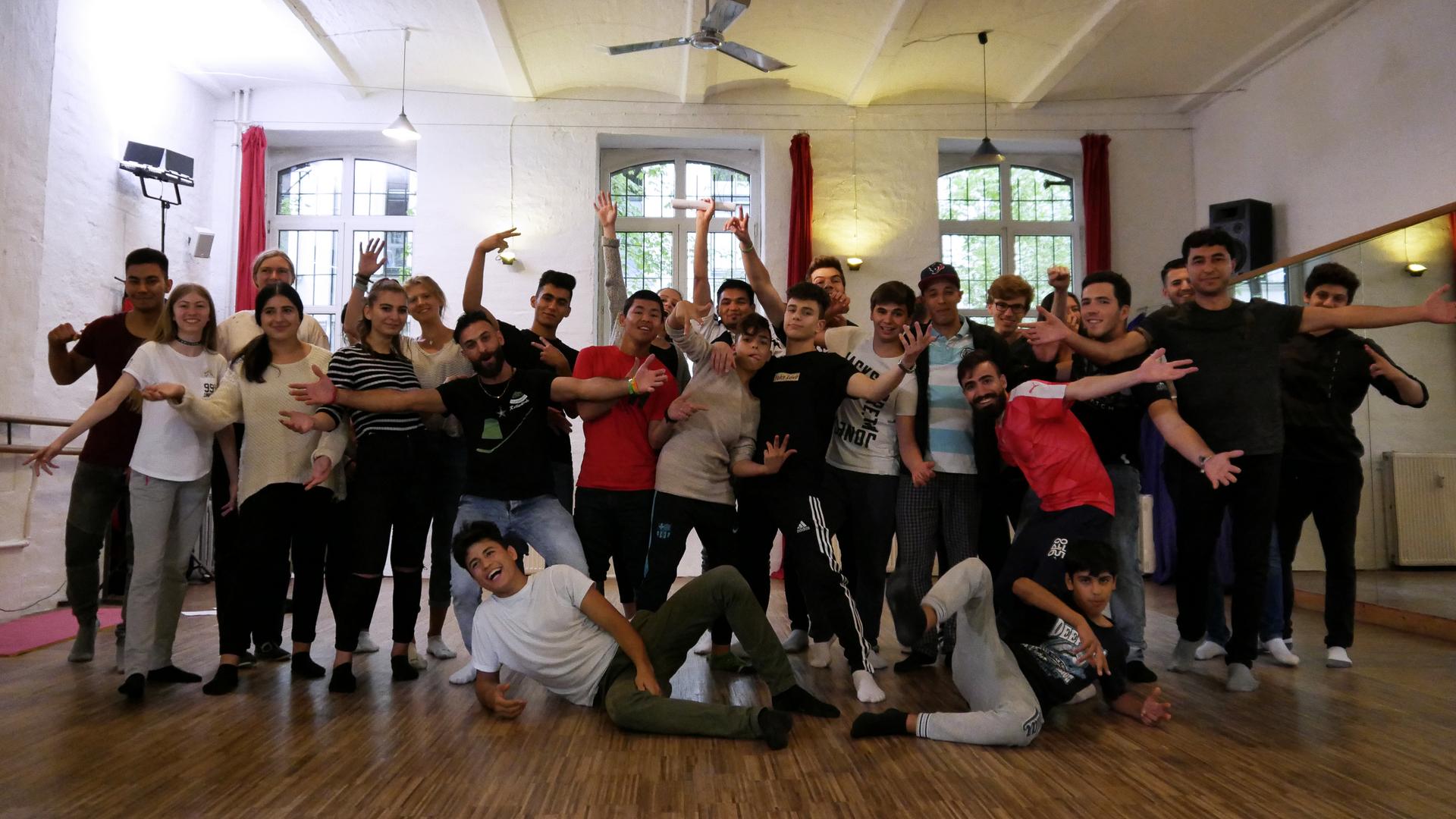 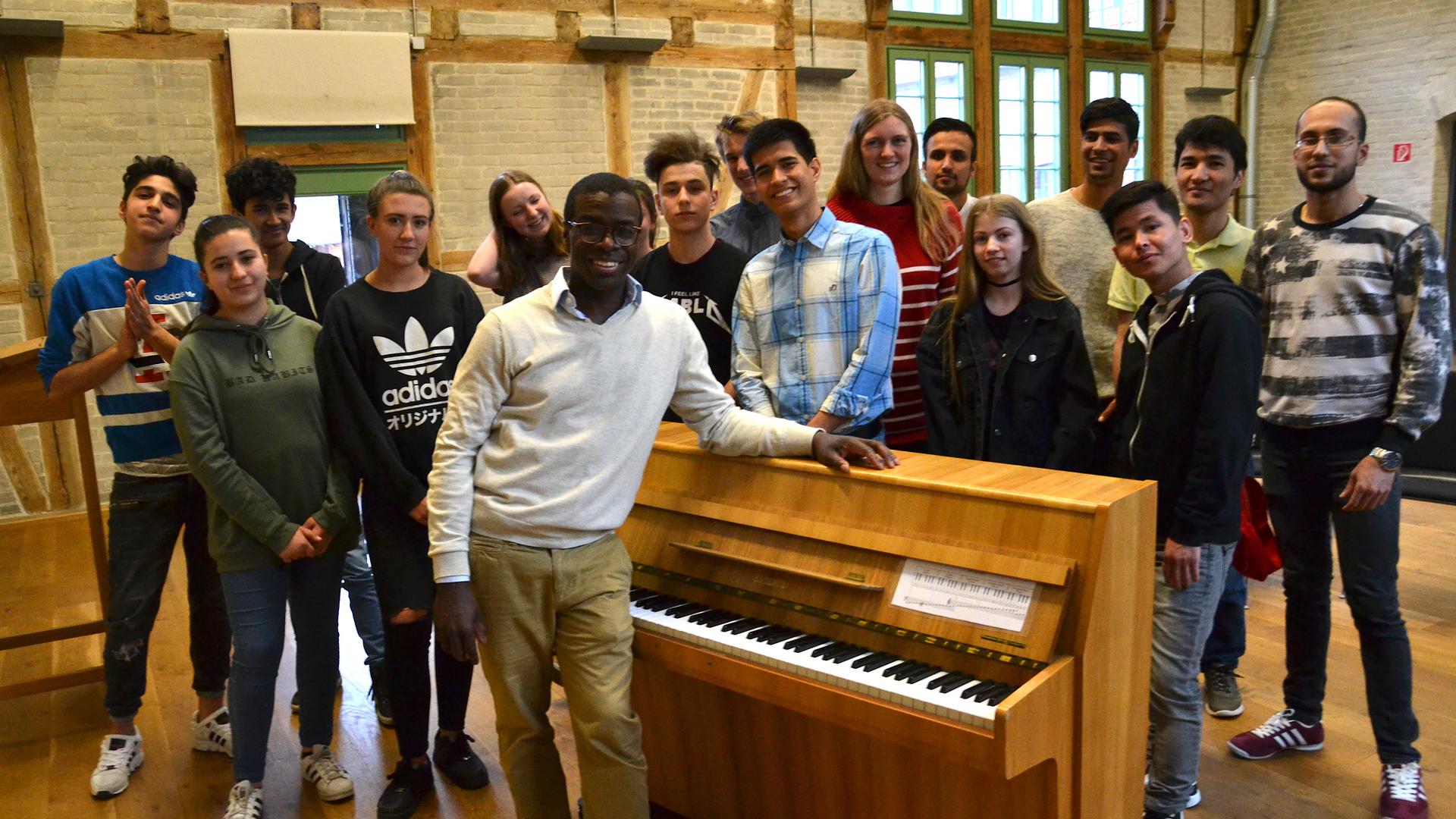 At the beginning of the year over 100 young Germans and refugees started work on an integration project centred on the staging of a musical. During the course of the project, they not only learnt a lot about their own abilities but also learnt from each other. They then took to the stage together in Berlin, Hamburg and Leipzig - supported by N&M apprentices who contributed their know-how in the fields of lighting and audio.

At the beginning of the year over 100 young Germans and refugees started work on the "Welcome Voices" integration project. Their joint goal was to stage their own musical entitled "Hoch hinaus" ("Flying High"). They were assigned the tasks of developing their own idea and concept, dancing and singing as well as designing their own costumes and sets, whereby they were asked to contribute not only their own ideas but also their personal experiences. Together they accepted the creative and artistic challenge, which helped them to discover themselves while also learning a lot about the other young people involved. Under the guidance of Todd Fletcher - an American composer and director who has worked with children and young people all around the world, staging over 35 musicals in the process - they conceived the show from the initial idea through to the première, which was held in Berlin on 18th October. Three apprentices from Neumann&Müller Veranstaltungstechnik assisted them in the design and implementation of the lighting and audio.

When it all started, none of the young women and men aged between 12 and 30 - from countries such as Syria, Afghanistan, Serbia, Turkey and Germany - knew how the musical would develop and whether they would succeed in winning over an audience. "Young people often don't recognise just how much potential they have," explains Fletcher. "At the beginning, 90 percent of the participants claimed they couldn't sing. As the project progressed, we were able to convince them otherwise." Over 1,000 index cards and fragments were the starting point for a work that gives the performers a voice and provides them with a stage to tell their story.

Besides the 50 performers, there were also numerous others involved in creation and development, stage sets and costumes as well as in organisation and technical systems. They learnt how to handle an ambitious project from the initial idea through to its implementation. Away from the stage, they designed marketing campaigns, created content for the website and social media, and worked with artists to produce props for the show. That is also part of the Eisodus (Greek for "arrival") programme run by the New York based "PluralArts International" non-profit organisation, which Todd Fletcher founded in New York in 1995 and in Berlin in 2007. Eisodus takes children and young people who have been forced to flee their countries and gives them the opportunity to discover their artistic talent and improve their language skills by means of cultural projects. They also gain an insight into the entrepreneurial aspects of musical production. This provides them with important tools for taking their lives into their own hands.

It is hoped that the new friendships between those involved on stage and behind the scenes will form the basis for inter-cultural exchanges. "The 'Welcome Voices' musical project is not only intended to delight audiences with great singing, acting and music; it also aims to show how the integration of refugees can succeed," says Ute Landwehr-von Brock from Malteser Hilfsdienst, whose "integration guidance project" is supported by the German government.

Maximilian Kloß, Stefan Siegmund and Maximilian Unger are the three N&M apprentices who contributed their know-how in lighting and audio systems to the "Hoch hinaus" musical. They received practical tips and assistance from N&M project manager Oliver Paulitz and other experienced technicians. Together with the Welcome Voices team, they worked out the lighting concept, installed the sound equipment and, after setting up the microphones, also assumed responsibility for the live sound and the light show at the mixing desks. Following the première in Berlin, the N&M apprentices were also present on the small tour at the performances in Hamburg and Leipzig. "We as a team were really up for this project right from the beginning. It wasn't only a question of being responsible for the technical side of sound and lighting systems that really do justice to a musical; implementing the project and working with the others was a fantastic personal experience," says Maximilian Unger. "We don't have much contact with refugees in our everyday work. We learnt a lot from our collaboration: about the people themselves, their hopes and concerns - and we experienced their dedication and creativity in this large team at first hand. That was impressive!"